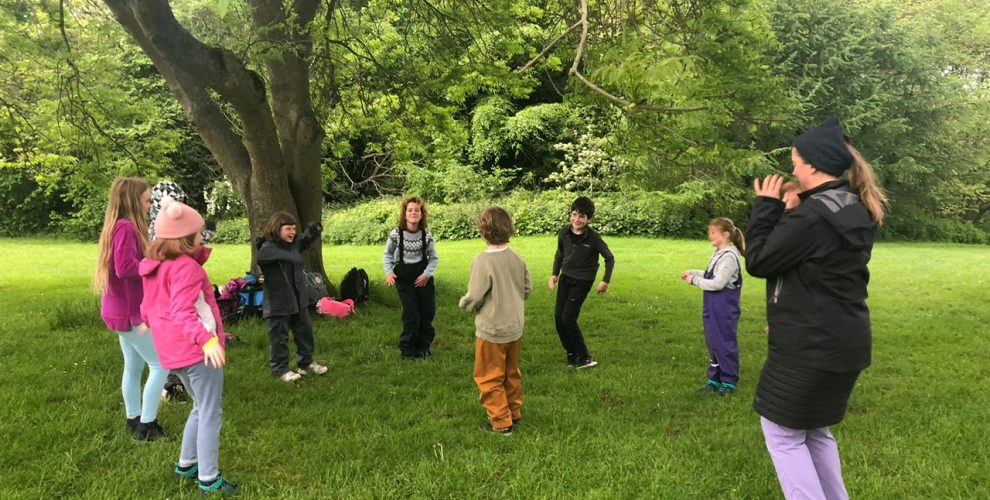 This is a blog written by Yuuki Blakeney, ゆ(Yu) う(U) き(Ki), a forest school leader, researcher and parent in the school. Here she captures some of the learnings and benefits that she witnesses for one group of 3rd class children over the summer term

It was a grey day for 3rd class’s fourth session. We started with the “Cuckoo bee game”, where a cuckoo bee, that is trying to steal the hive, needs to find who is leading the movement of the group. After having a great laugh playing that game, we moved on to take a look at the same trees we had observed in previous weeks, and take note of the differences. There were so many changes in the wood within just a single week. The children noticed that the ash tree had a lot more leaves and there were some ash keys forming too.

The “elder sitter tree” (an elder tree which has a baby oak and a baby holly tree growing underneath) had more flowers blooming, and the leaves of the little oak tree were bigger than they had been the previous week. The baby holly tree had new leaves coming out, which were light green and so soft to touch. The horse chestnut trees were also forming nuts. The children touched the nuts and found that they were soft.

The white and small flowers of the hawthorn tree were still in bloom. The teacher reminded them that the flowers and the leaves of the hawthorn are edible, so that we picked some for our nature tea. One of the children smelled it, and said, “Oh this is so fruity.” The stems of the ribwort plantains had grown very long, and the children compared the length of their stems and their heights. One of the children accidentally picked the plant from its roots, and the teacher said to him, “It is better not to take it from the roots. Put the roots back and it might grow again.” and he did so.

The needles of the larch tree were a bit darker and bigger than in the previous week, and we found that the taste was bit stronger too. It was the same for the beech trees. The children were learning the seasonal changes in trees and plants using all of their senses, and in this way, the natural cycle is becoming part of their lives. The teacher found a new plant, which appeared more dominant this week. She said, “Do you want to taste a new plant?” and the children said excitedly, “Yes!” It was vetch, a member of the pea family, and is edible. The children tasted the flower petals, and exchanged opinions. “It tastes more bitter than peas, and I don’t like it.” “I don’t like peas, but I like this!”

Then we went to the cherry tree, and the children found that it was forming cherries. It was still green and small. One of the children asked “Can I eat it?” and the teacher answered, “The plants usually protect themselves by not being edible before they are ripe, so it’s not a good idea to eat them at this stage.”

It took a long time to get to the basecamp, as there were so many things to observe and appreciate on the way. When we arrived at the basecamp, it was time for free play. This week, the competition of a café and a new restaurant were emerged. A group of children created a café in the previous weeks, but another group of children decided to make a new restaurant in a different setting. They named it “the grey wolf restaurant”, and everyone in the group found a role, such as collecting edible plants, constructing a wall, chopping edible plants, or serving food. Their menu was “wild garlic and gorse spaghetti!” The leaves of wild garlic were chopped to make pasta. The other group booked the restaurant, and eventually they came and tasted their food.

There was a magic in the imaginary play in the woods, because the resources are so rich and limitless in nature. Stones become tables and chairs, logs become a counter and walls, the leaves become money and decorations, sticks become knives, spoons and chopsticks, dead bark becomes a sign board, etc. There is no right and wrong in forest school, and what the children have is the freedom of innovation, creation, imagination and collaboration.

The most fun part was that they were playing together. Imaginary play seemed to give them a feeling of connection with their peers, which is important for their sense of security. They cooperate, watch what others are doing and react accordingly. Everyone was part of the play, in his or her own way.

Because everyone was so engrossed in this activity, the teacher let them decide whether they wanted to continue playing in the restaurant or doing the activity which the teacher had originally prepared for that day. The children wanted to continue playing with restaurant, so the teacher let them have more free play. This is because the role of leaders in forest school is to observe, reflect, assess and plan accordingly and to cater for individual children.

The smaller groups allow the leaders to facilitate more child led learning where they get to choose what they are interested in both individually and as a group. Where possible forest school leaders say “yes” and help them to develop their curiosity and love of learning. Though there is a lot of thought put into plans, it is pleasing if the session takes a different direction because the woods inspired something in the children.

Comments are closed.
DSP News INFO
All the latest school news, updates and more.
SEE ALL