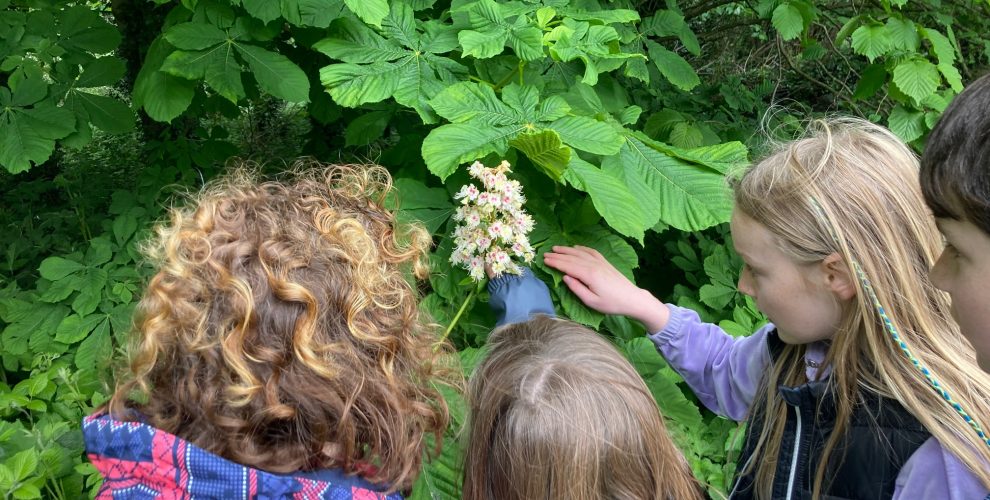 This is a blog written by Yuuki Blakeney, ゆ(Yu) う(U) き(Ki), a forest school leader, researcher and parent in the school. Here she captures some of the learnings and benefits that she witnesses for one group of 3rd class children over the summer term

It was a sunny day with a bit of a chilly wind for the third forest school session for 3rd class. We gathered at the meeting point, and the children enjoyed rolling down the hill while waiting for everyone to gather. We started the session by looking for things which had changed from the previous week.

The ash tree at the meeting point had a lot more leaves. A child noticed that the ash keys looked brown and dead. Then we went to see an Elder tree, and noticed that the flowers were almost in bloom. The teacher encouraged the children to touch the buds, and let them guess when they were going to bloom. A child said, “I remember building a den under this elder tree!” so she tried to get inside the bush, but soon said, “I can’t get in, I am too tall!” When we went around to see the tree from the other side, they noticed that the tree was quite old.

Everyone then came up with names for the tree such as “old nugget”, “elderly tree” and “red spider tree (because some parts of the branch were red)”. Then they found that there were a young oak tree and a young holly tree growing under the elder tree, so that they changed the name to “kindly helping tree”, “oak and holly sitter”, and “elderly sitter tree”.

Giving a name to a particular tree helps children to look at it carefully, and provides them with an attachment to the tree. They will recognise the tree when they come back and be able to notice changes through the years.

The leaves of horse chestnuts were almost at full size, and their flowers were in full bloom. The children enjoyed its sweet scent. The teacher told them it is called “cnó capaill (horse nut)” in Irish. Another child noticed the next tree, which has oval, pointy leaves, and it was so soft. The tree was hazel, but the children could not find the nuts yet.

The children kept finding different trees and plants, smelt the flowers, tasted the leaves with the teacher’s allowance, and shared their experiences.

For example, they found willow and wanted to do weaving, so the teacher said that she would bring some from home. They found wild garlic that was in bloom. They picked 1-2 flowers and tasted the flowers, and found the garlic flavour to be quite strong. The teacher spotted “witch’s broom” growing on a birch tree, which is likely caused by a fungus. They also noticed samaras on an Elm tree, which emerge before the leaves, giving the branches a frilly appearance. The samara consists of a seed surrounded by a papery, round covering about 1cm in diameter, and it is quite tasty to eat.

A relatively small number (10 children, 2 adults) and a few very enthusiastic and knowledgeable children made the group so open to learn so many things. When they found tree species they already knew about, or something interesting or they had never seen, they wanted to share them with their group and the teacher, and the teacher was happy to have the opportunity to share her knowledge.

After the exploration, we went to an open field next where there were many dandelions, buttercup and daisies. The teacher had black ink and paper and the children enjoyed making marks and patterns using different flowers. They noticed different shapes, patterns and textures in the petals, and different effects they could make when printed on paper.

When we finally arrived at the basecamp, we had lunch while the teacher told a buttercup story. The teacher also explained that the buttercup is not edible for humans. During free play, some children enjoyed playing in a den, which they called “Green Leaf Cottage”. They served real edible plants (gorse petals), in a leaf plate with chopsticks which were made of sticks that peeled the skin off for a Japanese customer (me!). A child made a sign for the cottage by making marks on dead bark with a stick.

Other children were on ground troll investigations again, and one child was enjoying making different sounds using sticks. Another group of children found some charcoal, and they used it to make some natural face paint by mixing it with water. After that we played the birds’ game, followed by sit spot and shared our findings and what we were grateful for in the end.

During this session, the teacher noticed that some living trees had been cut and used for building a den by somebody before we came here. She gathered the children and shared her reaction to this. The teacher pointed out that the tree seemed to have been cut very recently, which could be deduced by looking at the leaves. Also the cut was quite jagged, which would make the tree susceptible to infections. It is very important for the children to know that they should never damage the nature found in the site. The children should be able to teach others too if they see somebody is damaging the environment.

Children constantly learn from the attitude of the adults around them, their reactions and how they respond to certain situations.

So if adults don’t appear impressed by the beauty of nature, show awe and respect for nature, cherish other creatures, smell and touch them, it is very difficult for them to develop such feelings, especially when they are young. Forest School is meaningful in this sense as well, by providing the children opportunities to spend time with adults who are passionate about nature, are knowledgeable and have faith in what they are doing.