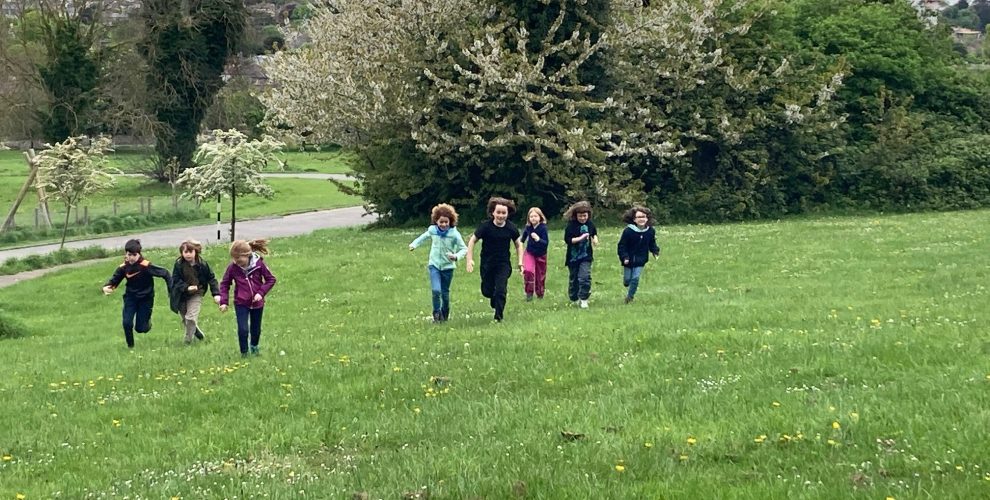 This is a blog written by Yuuki Blakeney, ゆ(Yu) う(U) き(Ki), a forest school leader, researcher and parent in the school. Here she captures some of the learnings and benefits that she witnesses for one group of 3rd class children over the summer term.

On the day of this second session together, the sky was grey with thick layers of clouds. While waiting for everyone, some children started to play with Ribwort plantain. This is a native plant in Ireland, and the tiny flowers in terminal spikes were just in bloom. Because this plant is widespread in Ireland and in Killiney Hill, the children could pick some of them and play with them. One of the children knew how to make the flower head fly with its bending stem, and she proudly shared her technique with others. The children also enjoyed a soldier game, fighting each other with the plantains’ long stems. Some of the children were brave enough to taste its leaves, which the teacher told them are not poisonous but have a bitter taste!

When everyone gathered, the children were invited to look at Ribwort plantain carefully in pairs, and to pick something that other people wouldn’t notice and discuss their findings. A pair of children noticed that the bottom of the stem was red, and the shape of the flowers looked like oats. Another pair noticed that the stem was hairy and its section formed a star shape. Another pair peeled a leaf and noticed that the veins were strong and coiled up when they were exposed to the air. It was a great activity to encourage the children to look at the plants closely and learn about them with each other. They noticed things, which even the adults didn’t know.

After everyone shared their findings, the teacher introduced more about this plant. For example, this was called “Ribwort plantain” perhaps linked with the way the veins of the leaf can look like a human rib. In Irish it is called “slánlus”, which is translated as ‘health herb’ as it was used as a medicinal plant in the past. It can still be used as a cure for nettle sting.

Soon after the teacher explained this, one of the children was stung by a nettle, but luckily she knew what to do. She immediately put a plantain leaf on her finger, and felt better. A bad experience like being stung by nettles led to development of knowledge about the properties of Ribwort Plantain, and an understanding that being stung by nettles is not such a fearful thing. These little nuggets the children get from forest school are a form of wisdom that they can pass on to others, and even to the next generations.

Having forest school at this time of the year is great as we can see so many changes week by week. More and more leaves are growing, the flowers of some trees have gone, and some berries or seedlings have started to form. On the way to the basecamp, the children were encouraged to pick out something which had changed from the previous week. Under an ash tree, children noticed that more buds were bursting and more leaves were growing. One of the children also noticed that there were more leaves growing on one side. Then the teacher asked them why this could be. They didn’t have a good answer, but when the teacher introduced them to the sun’s movement, they learnt that the side that had more growing leaves was the south facing side.

Forest School learning is so organic that the content of the sessions is formed by how the group of children act and interact, and how the forest school leaders and other adults react to their questions, actions, curiosities, findings and needs. In this case, without this curiosity coming from the children, and without a teacher who picked up on it, the group of children wouldn’t have learned about the relationship between tree growth and aspect.

After that, we moved to the cherry tree where we had danced in the previous week. The children noticed that the blossom had almost gone, and the leaves were bigger. The ash tree bore tiny ash keys which will become like helicopters in the autumn. The children then could not help rolling down the hill, which looked so much fun.

Children need to move and play outside on a regular basis in order to develop healthy sensory systems. Rolling down hills is one way to increase our body awareness and sense of space. Our vestibular or balance system is challenged by moving in all directions while rolling down grassy hills. Rolling also helps provide necessary stimulation to the muscles and ligaments in the body. This helps improve the proprioceptive sense and sensory processing.

Because there were so many dandelions in the open field, we picked some dandelion flowers from the bottom of their stems, and carried out an experiment. The children peeled the stems of dandelions in a few strips and put them in the water. Then they watched the stems curl up. They discussed why this happened, and learnt that the inside of the stems were “hydrophilic” (water-loving) and the outsides are “hydrophobic” (water-hating), so that the insides absorbed so much water that they swelled, while the outsides remained the same size, which forced the strips into curls. In this way, they learnt about the structure of the dandelion stems and the mechanism of how they absorb the water from the ground. A child put a clover leaf in the water for another experiment, and found that the leaves were waterproof.

When we arrived at the basecamp, it was time for free play. Some children built a den, which they wanted to use as a café, and they used a bundle of pine leaves as a duster to clean the floor. Others were trying to find signs of ground trolls.

Some of the children in this group were so curious and knowledgeable about trees and plants. From the previous forest school, they knew the inside of elder tree branches have white soft parts. A child questioned why some of the elder leaves had strange patterns, which the leader had never noticed and didn’t know the answer to.

Compared to the younger age group (6-7 year old), this age group of children (9-10 year old) seem to have more desire to know the plants’ names, and why and how certain natural phenomena happen. They enjoy finding out facts, carrying out scientific observations and conducting experiments together. They absorb knowledge like sponges.

After the free play, the teacher introduced a “bird game”, in which a team of three people act as parents and a chick, and the parents need to collect food without being caught by predators. It was a great game to understand how hard it is to be a bird and protect chicks as well as collect food for them. They developed more empathy for our non human friends through play based learning.

At lunch time, the assistant (i.e. me!) talked about forest bathing. This word came from Japan (“Shinrinyoku”) and it is embedded in Japanese culture. When we walk in the forest and are immersed in nature, our body and mind are so relaxed and refreshed, and the healing effects of nature have been used by medical professionals in some parts. Knowing these effects might give children resilience in their life when they feel stress and have inner problems. Having this in our mind, we went to have our “sit spot” which is a few quiet moments we take in nature each session, and experienced forest bathing.

The closing circle is an important part of forest school where we share what we noticed during sit spot and what we were grateful for from today’s forest school. Everyone in the circle has the opportunity to speak out about their feelings and findings. By doing this each session, the children get used to reflecting upon their experiences, thinking about what attracted them, what gave them joy, and sharing these thoughts with the group.

Forest School is not only a place where the children have a fun time in nature and learn about plants and animals, but they also learn so many life lessons – what it means to be alive, how trees, plants and animals strive to live and why all living things including us die and how we can contribute to other lives. They also learn how to reflect on their feelings and what it means to share our time, space and feelings with others, and many other things besides. These, I think, are important lessons that we as adults can share with our children