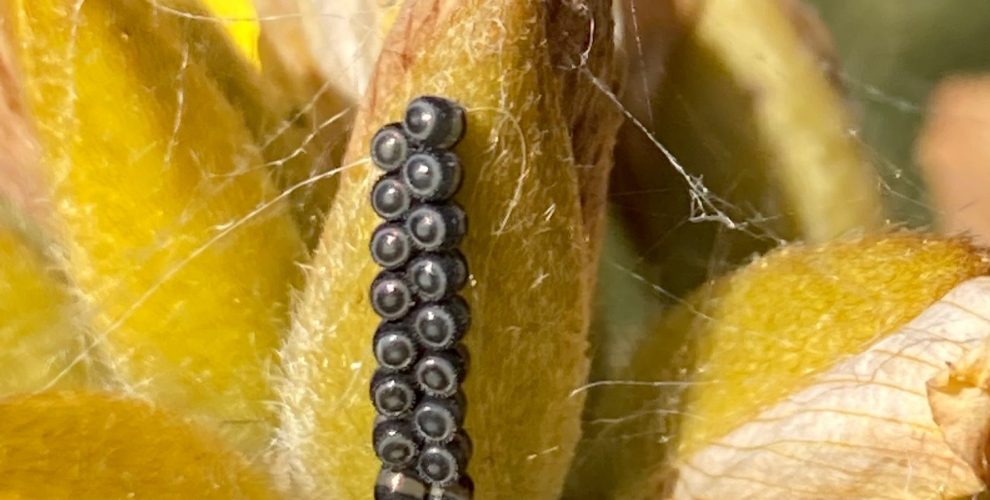 This is a blog written by Yuuki Blakeney, ゆ(Yu) う(U) き(Ki), a forest school leader, researcher and parent in the school. Here she captures some of the learnings and benefits that she witnesses for one group of 3rd class children over the summer term.

It was a lovely summery day for the fifth session. While waiting for everyone, one of the children noticed that the some of the cherries were getting red, and another child discovered that she could stick an ash key to her face.

In the opening circle, many children wanted to share their news over the last week. One of the children shared that his parents had told him that the three-cornered leek originally came from England. Another child said that she had elder flower tea at home over the weekend. It is great to hear that the children bring forest school home, and share their discoveries and knowledge with their parents. We feel that forest school brings with it a sense of community.

After the opening circle, we checked the “Elder sitter tree”, and picked a flower which had the nicest smell to put it into today’s nature tea. The baby oak tree was getting even bigger under the baby-sitter tree. The teacher told them that oak is “Dair” in Irish, and that there are many place names in Ireland that incorporate “Dair”. The children came up with some place names such as “Kildare” and “Derry”. Through learning the language, children get the opportunity to realise how Irish culture used to be deeply connected with nature.

On the way up to the basecamp, one of the children shared her finding that the pattern of fern leaves is repetitive from a small scale to a coarser scale, which the teacher said was called a  “fractal” in the natural world. The observations of children sometimes surprise adults. As they become accustomed to sharing their findings, they notice more things, which leads to a positive spiral of active learning.

This week, one of the children’s idea became the theme for the group. She brought a string from home, and started to make a big arrow with a big stick. Then the other children started to ask her how she made it, and by the end of the session, most of them had their own bow on their shoulders. They also mixed charcoal and water to mark tribal symbols on their faces. They experimented until they were happy with the colour and consistency. Once again, we digressed from the plan the teacher had developed, and it was great to observe how the session was led by the initiative, enthusiasm and inspiration of the children.

Another child brought a menu for her café from home. She wrote her very original cafe menu such as “Garlic toasties, leafy pancakes, gorse sandwich” and she even included reviews from customers such as “Heavenly” by red squirrels.  The ideas and imagination of children are way beyond adults’ expectations, and what is actually happening in children’s minds while they are spending time in nature can’t be over-estimated. While other children were creating a restaurant as a team, this particular child liked to just spend her time, seriously thinking about how to make her own café even better. She was completely absorbed in her imaginary world.

Free play in forest school means time free from any external impositions from adults in the form of games, cards, digital devices, toys, TVs, which might be the favourite things for the children when they are at home. However, in a space where there is nothing but nature, children seem to sharpen their own imagination, creativity, thinking, observations, judgements and their own senses. Children are able to cultivate their own selves and their relationships with each other, and I believe that it enriches and deepens their personal development.

At lunch time, the teacher read a leaf fairy story, and looking at the different leaves we had collected on the way to the base camp. The children noticed that they had different textures, patterns, and shapes. Leaves can be spiky, hairy, wide, straight, tall, thorny etc. They learnt that they are all green, and that the chlorophyll of the green leaves is working to absorb energy from sunlight. Trees take in carbon dioxide which is exhaled by animals, and they discharge oxygen which we in turn breath in. The teacher encouraged the children to breath, and feel that we are connected to the trees by every breath we take.

Sunshine welcomed us all back to DSP
Comments are closed.
DSP News INFO
All the latest school news, updates and more.
SEE ALL